While users stay at home, the number of views of videos depicting everyday activities in the home is increasing.

“Get ready with me”, “Study with me”, “Clean with me” and so on: YouTube shows a rapid increase in “With me” videos while most users spend their time at home trying to stem the spread of the corona virus. In the respective videos, the creators, accompanied by a camera, usually pursue everyday activities. The format has enjoyed great popularity for years, as YouTube explains. But now the “With me” content is experiencing a real boom.

Videos with #WithMe in the title have increased daily views by 600 percent since March 15, according to YouTube. Views of videos with “at home” in the title increased by about 590 percent. But it’s not only viewers who drive the format in corona times. The creators themselves also push the content. After all, all YouTubers who are usually out and about filming must now come up with something new. YouTube supports their efforts with the “#StayHome #WithMe” campaign. The campaign has been running for three days and calls on people to stay at home with the help of numerous content creators. YouTube has even created various playlists in its own channel, for example “Jam with me”, “Workout with me” or “Meditate with me”.

The first “With me” videos are 13 years old

The first “With me” videos were released in 2007, but the genre was rather niche until 2011. With the advent of the beauty scene, the “Get ready with me” videos were created, in which the creators filmed themselves during the morning routine and make-up. Meanwhile the genre is divided into numerous categories.

But the time that users currently spend more on the site, or rather in the app, does not pay off for Creator. Creator Hank Green tweeted a week ago that although the number of hits on his channels had increased, advertising revenues had fallen by 30 percent. This can probably be explained by the fact that advertisers have currently reduced their budgets. YouTube is not alone in this problem. Even Facebook recently stated that the corona virus is currently causing advertising revenues to collapse. 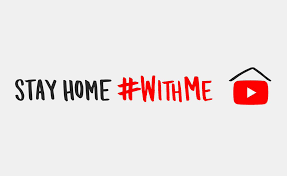